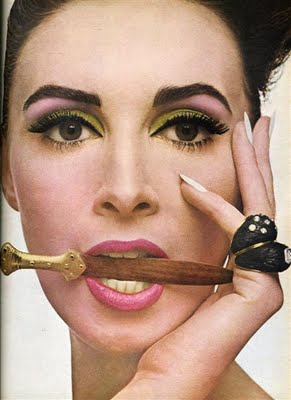 “The secret to modeling is not being perfect. What one needs is a face that people can identify in a second. You have to be given what’s needed by nature, and what’s needed is to bring something new.”
—Karl Lagerfeld—

Before there was the persona of the “Supermodel”, there were fashion models who were super just because they were exceptional, and had faces that could stand the test of time. As we’re eagerly approaching the Fall 2013-Winter 2014 fashion cycle, we thought we’d pay homage to some of the beautiful famous faces of fashion that were not only catalysts for the world’s love affair with fashion, but also helped build the enduring legacy of  importance that many of the world’s most popular fashion magazines enjoy today.

Born in 1919 as Dorian Elizabeth Leigh Parker, some records claim 1917…but a real lady never divulges her true age, she was considered to be the first supermodel of all time. Interestingly enough, Leigh really only propelled to the ‘Supermodel’ status when she was in her early 30s after she had already given birth to two children. Dorian Leigh was known as a trailblazer on many fronts, establishing the first legal Paris modelling agency in 1950. Upon writing her autobiography in 1980, entitled The Girl Who Had Everything, Leigh claims to have written it for her then-deceased son Kim stating, “I really wrote it for Kim, who will never read it. But perhaps other Kims and their parents may learn from my unhappy experiences.”

The subject of a longstanding battle with Dorian Leigh for the title of first Supermodel, Lisa Fonssagrives reigned as a top model through the 30s, 40s and 50s. Born in 1911, the statuesque Swedish phenom was known as a remarkable woman of tremendous beauty and grace and enjoyed being at the top of her industry for over 20+ years. Instantly recognized for her high cheekbones and startling Nordic looks, Lisa was first discovered in 1936 by photographer Willy Maywald while riding in an elevator. The model was not only beautiful, she was also artistically gifted and always took responsibility for doing her own hair and makeup on all shoots. On record as the highest paid model of her time, Lisa was famously quoted as describing herself as a “Good clothes hanger”.

Among the highest paid models of her time, Dovima, was one of the first models to cross over to acting with her cameo appearance in the movie Funny Face starring Audrey Hepburn. Discovered by a Vogue editor while walking on the street in New York City, during her very first photo shoot with photographer Irving Penn, Dovima wore the very first dress that Yves St. Laurent designed while working under Mr. Christian Dior as his fledgling new assistant. Not a bad beginning for such an unforgettable dame!

Little sister (as in family ties) to iconic model Dorian Leigh, this beautiful icon holds a place in fashion history all on her own. The first model on record to earn $100,000 a year, Suzy was a major fashion face in the 50s and early 60s. Her beauty was so beloved that it has been said that The Beatles even named a song after her; albeit an unreleased one. This 50s pin-up girl easily transitioned from modelling into acting and enjoyed a healthy second act.

Time Magazine ceremoniously labelled this British beauty a ‘Supermodel’ in 1971, making her one of the first to officially hold the title. Shrimpton is known for making the miniskirt a worldwide hit in 1967 after she wore a white one to Derby Day in Australia. Indifferent to her beauty and modelling success, she was quoted in a 2011 Guardian interview as saying, “I never liked being photographed. I just happened to be good at it.”

With a short, but highly influential modelling career, Lesley Hornby, or Twiggy as she is better known, left an indelible mark on the world of fashion and women of style globally. With her unconventional impish looks and face full of freckles, Twiggy was dubbed the face of 1966 and proved to be a triple-threat in the 60s and 70s as a model, singer and actress.

Born in 1939 as Veruschka von Lehndorff, this popular German Supermodel was in high demand in the 60s. As the daughter of Heinrich Graf von Lehndorff-Steinort, who was a member of the German Resistance, Veruschka became a well known artist in the body painting genre after her modelling career ended.

The daughter of a Countess, Marisa Berenson is an American born beauty that made a splash in the modelling world in the 70s. Between Gene Kelly teaching her to dance, Andy Warhol photographing her wedding, and being the granddaughter of iconic couture designer Elsa Schiaparelli; Marisa enjoyed a colorful career, and was the “it girl” that everyone wanted to be around. At the age of 63 she sashayed down the catwalk once again at the Tom Ford Spring-Summer 2011 Show during London Fashion Week proving that she never lost her sex appeal.

As a relative of the great retailer Marshall Field, Penelope Tree had fashion in her blood. She was infamously discovered at 17 years old by Vogue editor Diana Vreeland herself while at a soiree for Truman Capote. This chance meeting launched the career of a face not always perceived as conventionally beautiful. The once muse and girlfriend of famed photographer David Bailey, Penelope is credited with launching a movement for a different ideal of beauty.

Born before Fashion Week was even created, Carmen Dell’Orefice began her modelling career at the age of 13, snagged the cover of Vogue at the age of 16, and has enjoyed a mind-blowing career in modelling for almost 70 years. Currently the oldest working runway model in the world, Carmen’s beauty is the epitome of timelessness!

Nothing short of amazing, Beverly Johnson was the first African-American model to appear on the cover of American Vogue in 1974, which was a best-selling issue, and the first successful black Supermodel. Booking her first cover shoot with Glamour magazine in 1971, Beverly was an iconic face of the 70s and 80s and  had a honed sense of self, fueled by her accomplishments, which made her a role model for young women globally. Transitioning this popularity and demand into a successful film career, the world of fashion would never have been the same without her.

The daughter of refugees who fled their native Czechoslovakia for Sweden in 1968, a 3-year old Paulina Porizkova was left behind with her grandmother and, seven years later, reunited with her parents. As a two-time cover model for the coveted Sports Illustrated swimsuit issue, Paulina was also the face of Estée Lauder in the  late 1980s and early 1990s.  Author, actress and mother, Paulina is still making news in the fashion world and impacting generations of fashionistas.